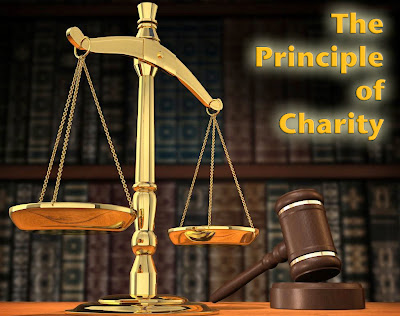 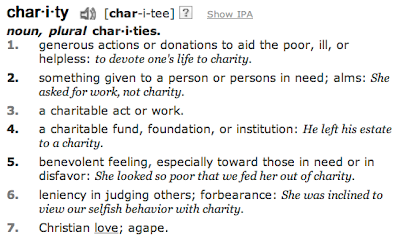 Just what I need. Yet another blog. But, this is how I learn stuff. I read, reflect, and write about it (and then I read and read and read some more, every day and night). Then I go back and evaluate what I wrote. "Are you full of crap here? Are you being reflexively polemical -- uncharitable? Or simply 'Ready-Shoot-Aim' Wrong?"

Our three most difficult words: "I was wrong."

I have to confess, given all the increasing, willful "noise" in our public discourse, I get to feeling rather uncharitable at times. I'm only human, and there are only 24 hours in a day -- pounding us with "messaging" relentlessly.


Principle of charity
From Wikipedia, the free encyclopedia

The principle of charity is a methodological presumption made in seeking to understand a point of view whereby we seek to understand that view in its strongest, most persuasive form before subjecting the view to evaluation.

In philosophy and rhetoric, the principle of charity requires interpreting a speaker's statements to be rational and, in the case of any argument, considering its best, strongest possible interpretation. In its narrowest sense, the goal of this methodological principle is to avoid attributing irrationality, logical fallacies or falsehoods to the others' statements, when a coherent, rational interpretation of the statements is available. According to Simon Blackburn "it constrains the interpreter to maximize the truth or rationality in the subject's sayings." 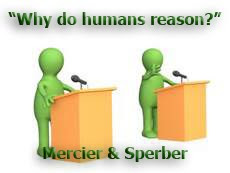 Why do humans reason? Arguments for an argumentative theory (PDF)

Abstract: Reasoning is generally seen as a means to improve knowledge and make better decisions. However, much evidence shows that reasoning often leads to epistemic distortions and poor decisions. This suggests that the function of reasoning should be rethought. Our hypothesis is that the function of reasoning is argumentative. It is to devise and evaluate arguments intended to persuade. Reasoning so conceived is adaptive given the exceptional dependence of humans on communication and their vulnerability to misinformation. A wide range of evidence in the psychology of reasoning and decision making can be reinterpreted and better explained in the light of this hypothesis. Poor performance in standard reasoning tasks is explained by the lack of argumentative context. When the same problems are placed in a proper argumentative setting, people turn out to be skilled arguers. Skilled arguers, however, are not after the truth but after arguments supporting their views. This explains the notorious confirmation bias. This bias is apparent not only when people are actually arguing, but also when they are reasoning proactively from the perspective of having to defend their opinions. Reasoning so motivated can distort evaluations and attitudes and allow erroneous beliefs to persist. Proactively used reasoning also favors decisions that are easy to justify but not necessarily better. In all these instances traditionally described as failures or flaws, reasoning does exactly what can be expected of an argumentative device: Look for arguments that support a given conclusion, and, ceteris paribus, favor conclusions for which arguments can be found.

One of the series of satires etched by the Spanish painter Goya is entitled ‘The Sleep of Reason Produces Monsters’. Goya believed that many of the follies of mankind resulted from the ‘sleep of reason’. There are always people telling us what we want, how they will provide it, and what we should believe. Convictions are infectious, and people can make others convinced of almost anything. We are typically ready to believe that our ways, our beliefs, our religion, our politics are better than theirs, or that our God-given rights trump theirs or that our interests require defensive or pre-emptive strikes against them. In the end, it is ideas for which people kill each other. It is because of ideas about what the others are like, or who we are, or what our interests or rights require, that we go to war, or oppress others with a good conscience, or even sometimes acquiesce in our own oppression by others. When these beliefs involve the sleep of reason, critical awakening is the antidote. Reflection enables us to step back, to see our perspective on a situation as perhaps distorted or blind, at the very least to see if there is argument for preferring our ways, or whether it is just subjective. Doing this properly is doing one more piece of conceptual engineering.

"There are always people telling us what we want, how they will provide it, and what we should believe."

to wit, U.S. Presidential campaign 2012. But, it antedates and goes way beyond that.


Stay with me. Just getting started.
___

From time to time it’s healthy to take a close and honest inward look at yourself – your life, community, philosophy, goals, and strategies. One of the things I admire about the skeptical community, of which I am a proud member, is that it does this on a regular basis. We wring our hands about exactly what we believe, the scope of our activity, the role of various philosophies in our thinking, the definition of skepticism, and even the word “skeptic.”

Collectively we seem to be endlessly restless and uncomfortable with ourselves. I think this is a good thing. Comfort and complacency may feel nice, but they don’t get you up in the morning an hour earlier so that you can blog to the world about some intellectual nuance, and they don’t lead to the kind of hard introspective questions that allow a movement to mature.

I find it especially useful when some comment about skepticism or the skeptical movement really annoys me. That annoyance is a signal that there is a cognitive disconnect between me and the opinions that annoy me – a conflict that can potentially be explored and resolved...